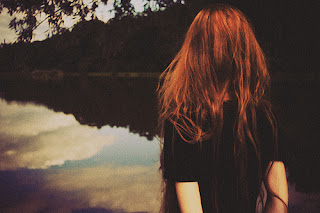 Fresh-faced and lithe, Céibhionn belonged to a fairy in medieval Irish lore — whose name implies a lovely head of hair.

Pronounced "Cave-in", like Kevin with more of a long-A (i.e., roughly rhyming with Haven or Raven), it's the "simplified" modern spelling of Céibhfhionn, a name made up of two elements: Irish cíab = "hair (of the head)" + fionn = "white, fair", a word used to describe a person with light hair or skin.

The name is found in one tradition of how the legendary hero Fionn mac Cumhaill (anglicized as Finn McCool) became all-wise, in which Céibhfhionn was one of three sisters who guarded their father's magic Well of Knowledge, so as to deny any wisdom-seeking mortals access to the secrets of the sídhe ("shee"). It was said to be located at the fairy-mound of Carn Feradaig in Cliú (now Cahernorry, near Limerick).

One day, however, they were approached by future hero Fionn and two companions, who were merely after drinking water. In her haste to block them, Céibhfhionn accidentally spilled the open vessel she happened to be holding, and lo, a few drops of well water splashed into Fionn's mouth — enough to give him wisdom.

Many now believe that the well maiden Céibhfhionn represented an ancient Irish goddess of inspiration, and comparisons have been drawn between her and Ceridwen of Welsh mythology: keeper of the cauldron of poetic inspiration (which Gwion Bach, like Fionn, unintentionally drank from).

Just think: The next time you make a coin toss "offering" at a wishing well, you may be mirroring the Celtic Irish in their worship of Céibhfhionn and other well divinities.

A small County Clare-based organization, the Céifin Centre for Values-led Change (pronounced KAY-fin) is named for the mythological figure.

"Céibhfhionn" is also the title of a Pinterest board dedicated to gorgeous locks o' hair.
Posted by Fae at 18:03 6 comments:

Clever Klervi (pronounced "Claire-vee") is the recently revived Breton form of Creirwy, a Welsh name of somewhat disputed meaning, which in legend belonged to the beautiful daughter of Ceridwen.

Saint Klervi was the younger sister of the great Saint Winwaloe, founder of Brittany's first abbey. In fact, all of Winwaloe's immediate family are regarded as saints, including their mother Gwen "the Triple-Breasted" (!!!). This semi-legendary family migrated from Britain to Brittany (then Armorica) in the 5th or 6th century AD.

Klervi, a patron of the blind, is remembered in connection with a surreal incident from her girlhood. Equal parts silly and morbid, the ancient legend of Saint Klervi involves an eyeball and an unsavory goose, and could be a Brothers Grimm fairy tale for all its ridiculousness.

Email ThisBlogThis!Share to TwitterShare to FacebookShare to Pinterest
Labels: breton, disyllabic, mythological, names of celtic origin, saintly, supposed to be spelled with a k k-names 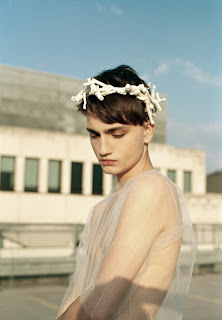 כַּתְרִיאֵל (Katri'el) is a traditional Jewish boys' name, probably meaning "crown of God" or "the Crowned Lord". Supposedly it was the name of an angel in Hebrew tradition.

The first element is thought to come from the root of Hebrew כֶּתֶר (kether) meaning "crown, circlet, diadem" ("a symbol of the highest significance in Kabbalah"), and second is the ubiquitous element אֵל ('el) "God". Its meaning is sometimes interpreted as "my crown is God" (or "God is my crown").

A notable bearer was Jewish Haganah commando Katriel Jaffe (1909-1941), who was one of 24 casualties in what Israel regards as the first military action of the Israeli army. Commander of an illegal immigrant ship in 1939, Jaffe was killed two years later, aged 31, in "Operation Boatswain": a failed British and Haganah attempt to blow up the oil refinery in Tripoli, "which was channelling oil to Rashid Ali's pro-Nazi regime in Baghdad". A Zionist immigrant ship was named the SS Katriel Jaffe in his honour.

In use since at least the Middle Ages, Katriel may be considered old-fashioned or dated by Israelis today. In Israel, Katriel is ― like most boys' names ― occasionally given to girls.

In the U.S. last year (2011), 5 baby boys were named Katriel compared with 13 girls (which methinks has to do with its similarity to "Katherine"; I wonder, too, how non-Jewish American parents are pronouncing it ― KAY-tree-ull, à la "Gabriel"?).

Other forms of the name include:

Email ThisBlogThis!Share to TwitterShare to FacebookShare to Pinterest
Labels: boys' names, hebrew, supposed to be spelled with a k k-names

Only slightly more wearable than Nymphadora, this fantastical name is a mouthful, but so much fun.

Nymphidia is attested as an ancient Greek name (Νυμφιδία); it literally meant "of a bride, bridal" in Classical Greek, and appears to have been a genitive form of the feminine name Νύμφη (Nymphē; Latin: Nympha) meaning "bride, young wife".

The masculine form was Νυμφίδιος (Nymphidios), Latinized as Nymphidius, which was borne by a Roman officer who acted in the final conspiracy against Nero. Nymphidius Sabinus was the son of a former slave named Nymphidia, who had been a mistress of Emperor Caligula. After Nero's suicide, Nymphidius tried to have himself declared Emperor, but was killed by his own soldiers.

The extended form Nymphidianus was also used as a name. It belonged to a sophist-Neoplatonist of the 4th century AD.

It's worth noting that the source of this name, Greek nymphe "bride", later developed the meaning of "beautiful young woman", then "semi-divine being in the form of a beautiful maiden" (the one we English-speakers are familiar with), which is why nymphidia translates differently in Modern Greek ― not as "relating to brides", but "nymphet".

It was in this "little nymph" sense of the name that the poet Michael Drayton used it in his fantasy epic Nimphidia (1627). The eponymous fairy Nimphidia is an attendant on Queen Mab who tells the poet everything that happens at Mab's court. (Drayton, a friend of Shakespeare, is also credited with coining the term nymphet.)

Nymphidia is also found in the scientific names of several butterflies, including the Columbine (Stiboges nymphidia).

To slim down this extravagant appellation, there's nickname potential in Nydia, Nia, Fidda and Nym, even Nimfy or Pixie. (Nimue is too far of a stretch, right?)
Posted by Fae at 16:22 2 comments:

This pretty May name from the Balkans consists of two elements: maj — simply the Albanian name for the month of May, combined with some derivative of the verb lind “to bear (child), give birth to.”

(The second element makes her a relative of Lindita, meaning “the day is born,” Mirlinda “well born,” Rilinda “born again” and Arlinda “born of gold.”)

Dr. Majlinda Bregu (born 19 May 1974) is Albania’s photogenic Minister of European Integration (she says: “Albania has a strong European perspective and clearly sees its future as a member of the EU”).

Aparecida is taken from the Brazilian Portuguese title of the Virgin Mary Nossa Senhora Aparecida meaning “Our Lady Who Appeared.” It is ultimately derived from the Latin verb apparere “to appear, come in sight, make an appearance” (itself from the elements ad- “to” + parere “to come forth, be visible”).

Aparecida is, first and foremost, the name of a statue, which gave its name to the church containing it and eventually to the village that grew up around the church.

It was used for the beautiful title heroine of a 1929 silent film, a Greek melodrama inspired by the Hollywood blockbuster Ramona (1928). Set in a remote mountain village sometime in the 19th century, it tells the story of an orphan girl smitten by her adoptive brother (Thymios) but made to marry a rich shepherd instead; in desperation she runs away, telling herself that she’ll “marry the sky & the stars & the darkness.” When news of her disappearance reaches her foster father his heart is softened, & eventually he & his son retrieve Astero, traumatized & incoherent, from a mountain cave; soon afterward Thymios sings a folksong that returns Astero to her senses & the young sweethearts are wed.

This “foustanella classic” was remade 30 years later with screen icon Aliki Vougiouklaki in the title role. The 1959 version of Astero (French: Astéro) was hugely successful.

Naturally it is also a close relative of the mythology names Asteria (used by Edmund Spenser in the anglicized form Astery (“AS-tər-ee”) for a nymph turned into a butterfly in his 1591 poem Muiopotmus; or, the Fate of the Butterfly), Astraea (which Aphra Behn adopted as a pen name; I like the French Astrée) & Astris (Greek: Αστρης; belonging to a star-nymph), as well as the modern English coinages Astra & (botanical) Aster (& its Hebrew form Astera).